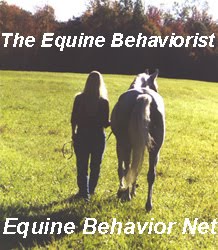 The Question: What do I do with a food aggressive horse?

I have a 13 year old gelding that was on the bottom of the pecking order for most of his life. He is docile most of the time, but he exhibits strong food agression even though he is in a private stall and being fed well.


Food aggression can be a difficult thing to deal with in horses.  It is often caused by insecurity.  We often see it with neglected horses who were not regularly fed:  once they start getting grain they don't want to let anyone near their food.  We also see it in horses who are group fed and have to fight other horses for their food.  Since you say your horse is the bottom of the pecking order, I would say his issues come from insecurity and probably from having to fight to get his food earlier in life.

You don't mention how long your horse has been stalled for feeding.  If you've only recently begun that, then I would give it time.  Some horses, though, never get over the issues that create food aggression.

With any food-aggressive horse, you need to give him a safe place to eat:  a stall of his own, preferably with no one next to him.  Leave him alone to eat - don't clean his stall, groom him, hang out with him, etc. while he's eating.   If he has a tendency to bite or kick at you when feeding, set his stall up so you can dump his feed into the bucket without entering the stall.


Good luck - and I hope some time in a safe environment will help your horse become less food aggressive.

Posted by Cowgirljenn at 9:48 AM No comments:

The Question: Why is my horse now scared of the farrier?

I have a 15 year old, Thoroughbred gelding, Simon, who up until recently has never shown any behavior issues.  I have always worked very hard on making sure his manners on the ground and when riding are impeccable.  In August of 2007, I got a new farrier when my previous farrier stopped trimming my horse.  The new farrier attempted to hot shoe my horse on the cross ties the first time he shod him.  Simon reared and struck at the farrier. I was away at school at the time so I came back for the next shoeing. Simon was scared, but as soon as I was around, he calmed down. After 4 times of working with him, he was back to normal and able to be shod on the cross ties without me.  I moved Simon to a new barn in September and my previous farrier is now shoeing him again. The first time he tried to shoe him, he was able to trim him, but as soon as he tried to put the shoes on, Simon reared and struck at him and ran to his pasture. The barn owner took him and lunged him and brought him back. He then reared and stuck his legs through the bars in the stall where they were trying to take out the one nail they got in.  I rested him for a week and tried again today. He was horrible for me as well and I ended up having to call the vet to have him sedated. I am truly at a loss. My horse is amazing and has never done anything like this and I am not sure where to even begin to fix this. Any advice that you could offer me would be fabulous. Thank you so much.
It is so confusing when a formerly quiet and good horse suddenly has a breakdown like this.  I doubt he's "just being bad" or anything. It is likely he's reacting either out of fear or out of pain.  Pain is the easier one to eliminate, so I would have your veterinarian examine him.  He's going to need to look for subtle signs of discomfort, do flexion tests, and check him out for arthritis or other pain.  I would be especially concerned about pain since you said he's fine until the farrier starts to put a nail in.
If he's arthritic or has some other source of pain, your vet can prescribe medication and treatment.  However the next few times your farrier shoes your horse, he still may react out of fear he'll feel pain.
If your horse is reacting out of fear, you'll have to work through his issues.  If your horse wasn't used to hot-shoeing, he may have been scared the first time the farrier tried to hot-shoe him.  If he was used to hot-shoeing, the farrier may have accidentally quicked him or set a nail wrong the first time, causing him pain, and causing him to continue acting out.
How does he behave in the cross-ties when he's not being shod?  If he's nervous about being cross-tied, then you are going to need to work on that first. I would start by cross-tieing him for short periods of grooming or something else he enjoys.  You may start with just a few minutes, making sure you can take him out of the cross-ties while he's still relaxed.  Over time, you can work your way up to longer periods.
If he's ok with the cross-ties other than when he's being shod, then you are going to need to work with your farrier.  You might want to talk to him about paying him to come out a few times just to handle your horse.  Pick up his feet, clean his feet out, rub on him, etc. and put him away while he's still relaxed.
When it is time to shoe him again, you need to talk to your farrier about paying him extra just to have him go extra-slow with your horse.  Before the farrier gets there, I would longe him and make sure he's blown off any excess energy. Make sure he's paying attention to you. You might try holding him instead of cross-tieing him, too, as some horses just don't care for the cross-ties.  Do not stand in front of him, though, in case he does rear or strike. Keep yourself and your farrier safe.
If his behavior does not improve and he doesn't need shoes, I would try having the farrier pull his shoes and just trim him for a few visits to get him more comfortable with the farrier.  Then once he's comfortable again, you might try having shoes put back on him.
I really do suspect pain as a trigger for his behavior, though, and I would recommend getting him checked out by a veterinarian soon.
Good luck to both you and Simon!
Posted by Cowgirljenn at 11:08 AM No comments: